Learn how LEGO® camps and classes can help unlock your kids’ interest in S.T.E.M. subjects and build important life skills. Plus: Discover 4 questions will help you find the right LEGO® program for your child.

Fun fact for LEGO® fans: These versatile building bricks got their brand name from a mashup of two Danish words: leg and godt, meaning play well. Since LEGO® bricks were launched in 1958, kids and adults alike have certainly taken “play well” as a personal challenge, creating LEGO® masterpieces (Will Ferrell’s New York scene in the movie Elf comes to mind), attending LEGO® festivals and conventions, and flocking to see The LEGO® Movie last year.

If you’ve got a kid who loves all things LEGO®, here’s a great gift idea that can help them take their building skills far beyond play time: Enroll them in an after school class or camp that uses LEGO® bricks as a tool for exploring, learning, and having fun.

Find Lego Camps & Classes Near You >>

Kim Nguyen-Ehrenreich is owner and executive director of Bricks 4 Kidz San Francisco, an organization that does just that. Her company (which has franchises in in all 50 states, as well as Puerto Rico and the Virgin Islands), teaches the fundamentals of S.T.E.M (science, technology, engineering, and math) subjects through the use of LEGO® bricks, using custom model plans created for Bricks 4 Kidz by engineers and architects.

The Bricks 4 Kidz programs don’t serve as another hour of classwork for kids, says Kim, but offer kids an engaging way to learn science and tech through hands-on building. Specifically, these “S.T.E.M. enrichment” courses guide kids to learn math, science, engineering, and technology concepts to help them build LEGO® models and robots. “Anything that’s interactive makes learning a lot easier,” says Kim. “I think our main goal is to get the kids to be excited about S.T.E.M. subjects so they can move forward in that area.” By learning how these subjects apply to something they love – LEGO® bricks – kids may develop an interest in S.T.E.M., eventually leading to success in school and a rewarding career.

Though many branches of science are touched upon during the 1-hour afternoon classes – including physics, engineering, life science, and others – the two points of the day’s activities are for the kids to learn and remember something related to the S.T.E.M. concept and to have some creative fun. Kids of all ages are able to use LEGO® bricks and technic gears to create simple moving robots, with help from their instructors and age-appropriate plans. Older kids – say, in third and fourth grades — also work with simple drag-and-drop coding computer software to “program” the robots to make sounds or move in a particular way. “We try to make these subjects enjoyable for them,” says Kim. “If they can also take away a key concept for the day, we’re very happy.”

Why Not Just Build at Home?

Though free play with LEGO® bricks does allow kids to be creative, many of the new kits on the market today are essentially models, explains Kim. Often, kids will get a kit, build it, and leave it intact, she says. “So the element of free play is out the door.” In Kim’s programs, kids use LEGO® technic bricks to build something entirely new each week. Also, the model plans used by Bricks 4 Kidz were designed just for Kim’s programs, so they’re different from anything kids will find on store shelves. (A quick tip from Kim: Be sure to get your LEGO® fan some bricks that aren’t part of a kit – or get them an extra kit or two that they won’t leave intact — so they can dream up their own projects at home!)

Bricks 4 Kidz programs teach skills that help kids in all aspects of life, not just S.T.E.M. subjects. “They learn how to work in a team setting,” says Kim. They also develop fine motor skills, as well a self-confidence and perseverance. “Building a model is not always easy,” says Kim. Working to complete a challenge helps build patience and character. And kids take the skills they learn in S.T.E.M. LEGO® class back to their school classroom and their play room at home. “I’ve heard from a few of the parents that kids who took our classes seem to be more focused on whatever project they’re working on,” says Kim. “They become more excited about building with LEGO® models and learning about science.”

There are LEGO®-based kids’ programs popping up all across the U.S. — and not just in the sciences. You may find LEGO® art classes, LEGO®-themed birthday parties, model-building camps, and even activities focused on developing civic responsibility and leadership. (You’ll find plenty of options on ActivityHero!)

Here are a few key questions Kim suggests you consider when checking out LEGO®-based programs in your area:

Is class placement based on both age and skill level? In LEGO®-based programs, the curriculum should be age-appropriate, says Kim, but instructors should be sensitive to the needs and abilities of each individual child. “Some kids have really defined fine motor skills as a kindergartener,” she says. This means they might be really good at manipulating tiny bricks and assembling more complex models than other kids in their grade. At Bricks 4 Kidz, children are paired with others who have a similar skill level, which helps them work together in a way that allows them to build their self-confidence and learn cooperation and patience.

Is the curriculum unique to that program? Kim’s program uses special plans created by engineers and architects. This means that the kids in her programs will be completing models that aren’t available elsewhere.

What are the goals of the program? For the younger kids, goals are probably more basic. Children might learn to break down a project into small goals and solve problems along the way. They begin by sorting and identify the pieces, reading simple project plans, and learning how different bricks and gears work together. As kids get older, they can explore other skills, such as using pre-coding software to direct a robotic LEGO® creation to move or make sounds upon command.

Is there individualized attention? Rather than have a lot of kids working on one big model, Bricks 4 Kidz encourages children to work in pairs and on smaller, motorized models. She says this gives each child plenty of hands-on time – and a greater sense of accomplishment.

For girls, are there gender-neutral or girls-only programs available? Currently, all Bricks 4 Kidz programs are gender-neutral, says Kim, but she plans to expand the girls-only offerings in the coming years. “Particularly with middle-school girls, it’s hard to keep them interested in S.T.E.M. subjects,” says Kim. “We have to pull them in a little more and help them build their confidence.” Programs designed for girls can help do just that.

What are the instructors like? When hiring instructors, Kim looks for people who are going to be mentors for kids. “We look for people who love to be with kids and to be able to help them learn,” she says. “They make a connection with the kids and encourage them to take on challenges. We have kids coming out of our programs really loving our teachers.” Ask to meet with some of the instructors, ask for some specific information about the teachers, or read their bios so you can tell if the teacher will be a good match for your children.

Does the program look beyond LEGO®? “We’re not exclusive to LEGO®,” says Kim, who is offering winter break camps that teach kids about renewable energy, the water cycle, and water conversation – a current hot topic due to the ongoing California drought. “We’re teaching kids about the things their parents hear on the news that impact our daily lives,” says Kim. “There’s no limitation to LEGO®,” she adds. “But we incorporate a lot of mediums in our full-day camps to teach different aspects of our focused theme.” 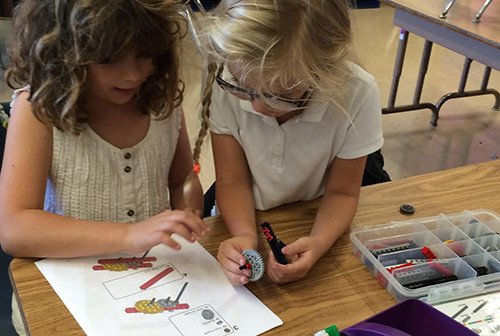 Getting More from LEGO® Play at Home

One of the easiest ways to encourage your kids to get more out of every LEGO® session at home, says Kim, is to sit down and play with them! “I think when parents sit down with their child, that helps kids feel confidence in building,” says Kim. “And it helps build the level of connection between the parents and their kid.” Though Kim acknowledges that it can be tough to find time to build with your children on a weekly basis, her company sometimes offers mother-daughter and other parent-child workshops that carve out a bit of time for you to bond over a big, colorful pile of these time-honored toys.

Find a LEGO®-Based Activity in Your Area

Ready to see what LEGO® classes and camps are offered in your community? ActivityHero can help! Check out our special LEGO®-based offerings today, and give your child a LEGO®-related gift that will keep them playing happily throughout the winter!

Lego Camps & Classes Near You >>