Kitchen Science: Easy and Fun Experiments Straight from the Cupboard | The ActivityHero Blog

You don’t need spendy science kits to have fun with your kids and teach them (or learn with them) about science at home. Never fear – you don’t need special tools or any deep knowledge of chemistry to take on these projects. Your kids will be thrilled to be doing science with you and you can be excited that they’re doing something educational and spending a few minutes away from video games, texting and TV. There are endless possibilities for at-home science and these experiments can be done with things you already have in your cupboards or that you can pick up for cheap. Unwrap the bar of Ivory soap and place it in the center of the plate. Turn the microwave on and just watch what happens. The soap will begin to bubble and puff up, then will expand to 10 times or more its original size. It’s incredible to watch. Expect a lot of oohs and ahhs from the kiddos. Once it’s splendidly large, turn off the microwave and open the door, but don’t touch! It will be hot.

Wait a few moments then use a pot holder to pull out the plate. Wait about 5-10 minutes for it to cool then your kids can touch it, break off chunks and even wash their hands with it. While they wonder at the feel of exploded soap, you can explain the science behind what they saw and are now feeling. The soap will get a bit harder once it cools down, but it will stay in the shape it expanded to.

Ivory soap is whipped up with air, that’s why it’s so much lighter than other brands of soap. The microwaves interact with the water molecules inside the air pockets trapped in the soap. The water molecules turn to steam and that increases pressure on the soap and breaks down the outside. It then puffs out for the same reason that popcorn kernels do when they’re microwaved. Cool, huh? 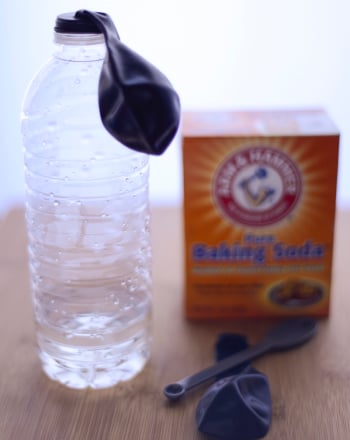 Using the funnel, have your kids pour two tablespoons of vinegar into the balloon. Secure it tightly with a twist tie close to the lump of filling. Next, rinse your funnel and use it to fill the water bottle with a cup of vinegar. For littler kids, you can do this prep work for them or help out with the sloppy parts, but ages five and up should be able to do all this on their own.

Stretch the neck of the balloon over the neck of the bottle with the twist tie still in place. Once it’s snug in place, undo the twist tie and let the baking soda fall into the vinegar and watch the balloon inflate as if by magic. Your kids will be amazed. Once it’s done, they can remove it and knot it off and it will stay inflated just as if you blew it up with your mouth.

Baking soda is a base and vinegar is an acid. When combined, there’s a chemical reaction that breaks apart both original substances and forms new ones. Baking soda is sodium bicarbonate and vinegar is acetic acid and water. This chemical reaction leaves you with water, salt and carbon dioxide. It’s the carbon dioxide that fills the balloon. Recognize CO2? That’s the stuff we breathe out. 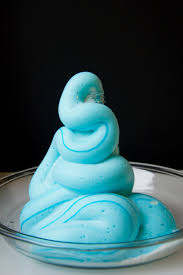 Use gloves to keep peroxide off your kids’ skin and make sure your kids don’t get it in their eyes. Use the funnel to pour ½ cup peroxide into the water bottle, add ¼ cup dish liquid and a few drops of food coloring. Gently swirl the bottle to blend the ingredients. In the bowl, mix the packet of yeast with a bit of warm water and leave it for 5-7 minutes until it’s foamy and active.

Put the bottle into the center of the pan to control any mess and then use the funnel to pour the active yeast mix into the peroxide/soap mix. Then stand back and be amazed. You’ll get a foam that expands up and out of the bottle like a gush of toothpaste out of a tube. Standard peroxide will give a thinner foam. Let the kids touch the foam and bottle to feel the heat that comes with the chemical reaction!

Hydrogen peroxide has lots of oxygen in it and when you added the yeast, it served as a catalyst that remove the oxygen really fast and created tons of bubbles. Because it also produced heat, it’s called an exothermic reaction. The products left over are just soap, water and oxygen, so it’s safe for your kids to touch – but don’t let them get it in their mouth or eyes.

When disposing of your science experiments, you can keep the Ivory soap around, just chip it up and put it in a bag for hand washing or toss it in the trash if you don’t want to keep it. The baking soda and vinegar from the breathless balloon can go straight down the drain – they’re harmless. The elephant toothpaste leftovers can also go down the drain since it’s just soap and water.

And, you never know, your kitchen science experiments may inspire one of your kids to be the next Neil deGrasse Tyson or Mary Leakey. If these science experiments are a big hit, there’s no need to stop here. Check your local library for a book on at-home science for deeper exploration of the subject.

Find science camps near you >>

Rachel is a freelance writer and busy mom of two tween boys. She enjoys hiking, Geocaching and spending time indoors and outdoors with her two legged and four legged love ones.

View all posts by Rachel Stamper →